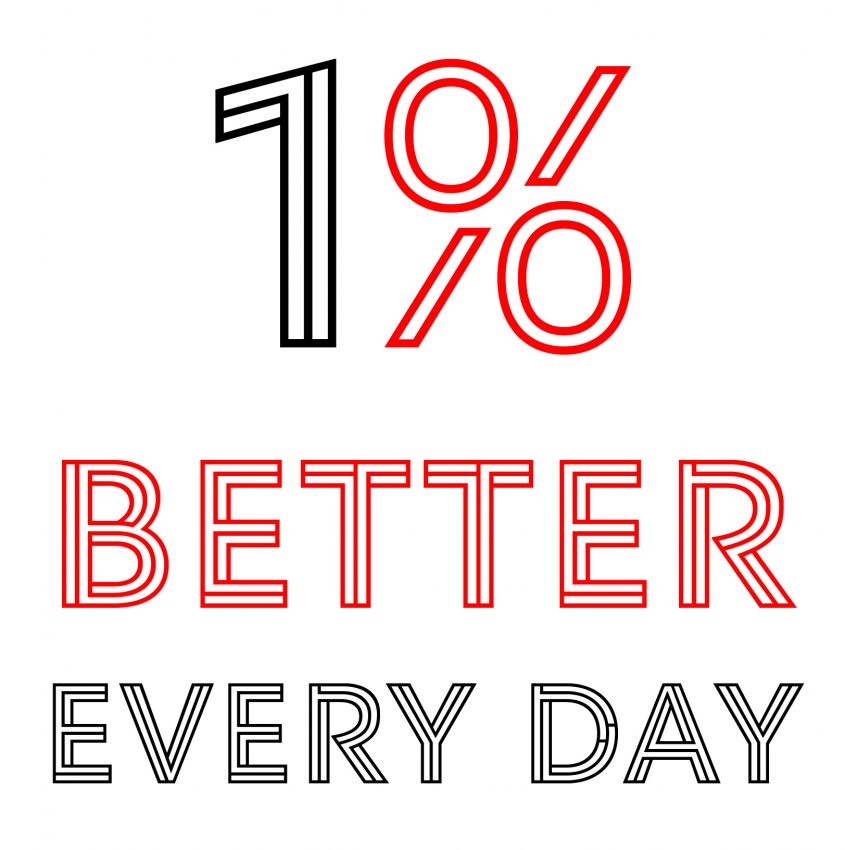 Do you ever feel paralyzed by your aspirations for a better life, or overwhelmed by how far your future goals are from your current reality? It may be an inspiring exercise to dream big and ponder the sort of life we want to be living in 5-10 years, but in order to turn dreams into reality we must take a closer look at how seemingly small habits factor into the bigger picture: our choices ultimately shape our future.

Each new day is a fresh opportunity to build a better tomorrow. You can’t change the past, and you don’t know the future, but you can anticipate outcomes and attempt to plan accordingly. It is fully within your control to create possibilities in the present by consciously cultivating small choices today that inevitably impact tomorrow.

James Clear opens his fantastic book on building and breaking habits with a key concept of behavior change that he calls the 1% Rule, which serves as a foundational principle for Atomic Habits. Much like the financial results of compound interest over time, the 1% Rule of behavior change puts a year of behavior change into perspective. Small actions may not seem to have much impact on any given day, but when small actions become ingrained habits, the results compound and will either produce powerful long-term benefits or could set you up for crippling consequences.

In this visual, Clear demonstrates how a 1% daily improvement compounds to 37% growth by the end of a year, and conversely a 1% decline results in basically a flatline state of stalled potential.

Time is the key that unlocks the potential of compound interest, and it pays to start earlier rather than later. Compound interest growth works like this: you make an investment that produces interest. That interest is then added to your principle investment to increase your earning potential, and additional gains will snowball over time as the principle builds and you continue to earn interest on interest.

Compare it to a timeline of saving money for retirement: you’ve got to start somewhere if you want to end up with something to draw from down the road. Sure, it would be great if you start saving at 25 – and you stand to gain the most from a small initial investment because you have more time to experience compounding results, but if you’re 35 and haven’t started saving for the future, then it’s not too late to start. Saving something is better than nothing.

You’ve no doubt heard that time is money. Both can be used in two ways: are you spending or are you investing? If you aren’t intentional about preparing for the future, you are likely to fall into the default trap of spending all of your time reacting to the never-ending demands of life. When you deliberately set aside blocks of time to focus on investing in your future, you cultivate habits that will result in tremendous long-term benefits.

The 1% Rule also illustrates how important it is to take action in a positive direction, however small, and focus on maintaining consistency in order to build habits that create a solid foundation for the changes you aspire to make. Just as with compound interest in a retirement savings account, the initial days, weeks, months, and even years may not appear to show a significant difference, but the investment grows and accelerates dramatically 5, 10, 15 years down the road. It’s a lagging outcome.

James Clear goes on to layer a common, though unrealistic, expectation of linear growth over the 1% better growth curve, which highlights the difference of perception vs. reality that often discourages us from continuing to make those small daily investments when it appears that we’re not making much progress. Clear has dubbed this effect as the “valley of disappointment,” and his graph of the Plateau of Latent Potential illustrates why it is so important to begin with the end in mind and keep your long term focus on building the habits required to reach your ultimate goal.

Most people give up too soon. We’re now over two months into the year and have already passed the point where many people have abandoned their New Year’s resolution efforts. The excitement and novelty has faded, and new habits are not quite automatic behaviors in mid-February when many people give up on their resolutions. While some popular advice used to frame habit change as a 21 day process, new research has shown that the time necessary to create automatic habits is closer to 2-3 months, with 66 days as a commonly highlighted average.

It’s easy to get caught up in feelings of overwhelm or inadequacy when your aspirations are far from your current reality, and it’s also easy to experience a block and not know where or how to start. I’ve listened to several episodes lately of The One Thing podcast that address this struggle by teaching the importance of time blocking your One Thing – the lead domino that will make everything else fall into place.

When you combine the 1% Rule and The One Thing, you can zero in on the most important activities you can do to accomplish your goals. Invest your time in what matters most.