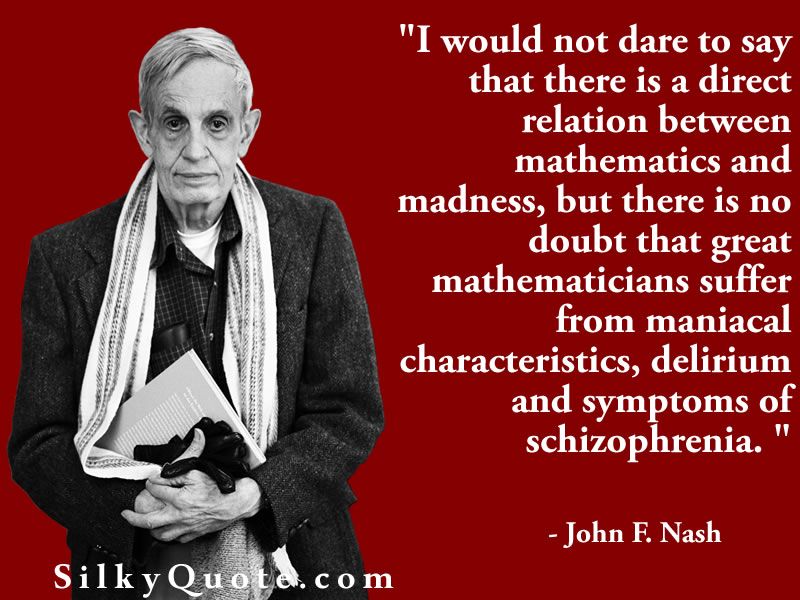 Over the weekend I watched A Beautiful Mind, the Oscar winning film from 2001 about the brilliant mathematician and Nobel laureate John Nash, who was plagued by paranoid schizophrenia for decades before eventually learning how to manage his delusions without medications.

Stepping back a few weeks, I read a great book at the beginning of January entitled A Curious Mind by Brian Grazer and Charles Fishman which chronicles how Grazer has utilized his avid curiosity throughout his career as an award winning Hollywood producer. When he described some of the back story of producing the film A Beautiful Mind, I immediately knew I needed to watch this movie in conjunction with the 2020 Math Project.

Grazer has a son with Asperger’s syndrome and as a result, he possessed a longstanding desire to make a movie that would destigmatize mental illness. When he read an excerpt from Sylvia Nasar’s book A Beautiful Mind about the life of John Nash, Grazer immediately knew it was the movie he needed to make to change common perceptions and attitudes towards people who struggle with pervasive mental challenges. In the process, he created a masterpiece that Grazer says is “unquestionably the most gratifying movie I’ve ever made.”

In the early stages of filming, Grazer hit on the idea of portraying Nash’s reality from the eccentric mathematician’s point of view, no different than anyone else’s reality. While Nash was never officially diagnosed, his social aversions and peculiar behaviors are common characteristics of Asperger’s, and the movie has since been highlighted by clinical psychologists as a depiction of ASD.

While I knew that schizophrenia was a key part of the story before watching the film, I was still caught by surprise when the complexities of Nash’s psychotic delusions were exposed. The end moved me to tears, and I was particularly struck by the way Nash eventually harnessed the power of his mind to control the delusions. He finally came to the conclusion that he needed to use his own intensely logical mind to ignore the voices and visions until they eventually lost their power over his daily existence, and by this he regained enough degree of control over his life to resume work within the safe haven of academia.

I was also overwhelmed with compassion and empathy for his wife Alicia as she struggled to support him during the early stages of his diagnosis while simultaneously navigating the challenges of being a new and virtually single mother. The stress of managing the care of an infant alongside an unpredictable adult partner who also demanded a high degree of supervision is undeniably intense. The film portrays an inspiring love story between Alicia and John where she makes allowances for his brash and eccentric personality early on and remains a strong supporter during his early treatments and subsequent years of tedious efforts to manage his illness. The story reaches a climax when Nash finally achieves control over his delusions and is presented with the Nobel prize for his groundbreaking work many years prior on game theory and economics, and subsequently credits Alicia for his survival.

At this point in the story, Alicia and John have aged several decades. In his Nobel acceptance speech, John says:

“I’ve always believed in numbers and the equations and logics that lead to reason. But after a lifetime of such pursuits, I ask: ‘What truly is logic?’ ‘Who decides reason?’ My quest has taken me through the physical, the metaphysical, the delusional — and back. And I have made the most important discovery of my career, the most important discovery of my life: It is only in the mysterious equations of love that any logic or reasons can be found. [Looking at Alicia] I’m only here tonight because of you. You’re the only reason I am; you are all my reasons.”

Yes, there were tears welling up in my eyes by that point…and I don’t cry very often. I wrestled with admiring Alicia for her dedication and support, yet I also wondered what compelled her to stay by his side through such intense struggles. I could put myself in her shoes and see how I could have a tendency to end up in a similar position where I would put my own aspirations aside to be a stable source of support for years – but I also imagine that I’d eventually hit a breaking point and would come to a conclusion that I needed to walk away from a relationship like John and Alicia’s for the sake of self-preservation and also to ensure a stable environment for my child.  What was it about their relationship that held them together through old age? Is love really the ultimate tie that binds? Or was it a sense of duty? Was the cultural norm of female subservience a factor? Or was it primarily a testament to how truly exceptional John Nash’s mind was that both Alicia and the Princeton mathematics community banded together to provide a safe environment for Nash, in shared hopes of preserving his intellect in case he ever recovered enough to resume his revolutionary mathematical pursuits?

This story fuels some burning questions that I’ve wrestled with throughout my life, primarily centering around how to balance the need for self-care when the needs of people you love and care about demand an abnormally high level of support. I witnessed my parents struggle with setting boundaries with unstable family members from a young age, and I have gone on to develop a complex array of relationships with a number of friends, family, and acquaintances who demonstrate eccentric and unstable qualities of mental illness and brilliance. In fact, I often find myself drawn to these types of people – the misfits, outsiders, oddballs, and unusually intelligent and creative humans who have a number of quirky characteristics that I find intriguing and endearing, even though they often require extra patience and tolerance than the average person. However, I’ve come to recognize the importance of establishing personal boundaries, particularly with these humans who may have some level of special needs. I’m currently in the early stages of studying boundaries within the dynamics of human relationships, and the Nash story is a compelling case study.

As I am apt to do after watching a compelling biopic, I began to research historical accounts of the lives of John and Alicia Nash and found some surprising elements of their story that weren’t portrayed in the movie. Alicia actually did hit a breaking point and divorced John in 1963, a few years after his initial diagnosis in 1959. He was in and out of psychiatric hospitals for several more years before Alicia finally agreed to let him live at her home as a boarder in 1970.

It was during the following years that John Nash began to gain control over his illness and present signs of remission without medication or any further hospitalization, though another dozen or more years passed before his progress toward recovery began to be noticed by others. Colleagues and students at Princeton viewed him as an odd, quiet enigma known as the “Phantom of Fine Hall”, as he’d become a familiar solitary presence in the math department and library for many years. Eventually he was able to reestablish himself in the world of academia and was awarded the Nobel prize in 1994 for work he completed in his early twenties.

It was only around the time of the Nobel award that John and Alicia resumed their relationship as partners; Alicia had continued to regard John as a boarder in her home throughout his lengthy recovery period. The couple remarried in 2001, coinciding with the debut of the film that popularized their story, and they remained together until their tragic deaths in a taxicab crash in 2015.

As much as I’m captivated by John Nash’s story, I’m compelled to learn more about Alicia’s life in order to better understand her role as the anchor of the family. It turns out that John and Alicia’s son is also a gifted mathematician and schizophrenic whose symptoms began to appear as a teenager. I can’t even fathom the fortitude of this woman and everything she sacrificed in order to support two brilliant schizophrenics.

Alicia was highly intelligent herself, one of a small number of women admitted to M.I.T. in 1955, where she studied physics and also met John Nash. She had early aspirations to become the next Marie Curie, but ended up transferring her ambitions to John and his pursuit of revolutionary ideas, and ultimately put far more effort into supporting and protecting John’s intellect than pursuing a groundbreaking career of her own – though she did work as an engineer and programmer for many years to support the household as the sole provider for the two Nash men whose lives depended on her stability. Later in life, she became a respected mental health advocate and spokesperson.

When reflecting on the early days of her husband’s diagnosis, Alicia recounted:

“I tried to remain positive as much as I could, and I really tried not to feel pity for myself.”

And in reference to her decision to take John into her home ten years after the initial onset of his illness:

“They say that a lot of people are left on the back wards of mental institutions, and somehow their few chances to get out go by and they just end up there. So, that was one of the reasons I said, ‘Well, I can put you up.'”

Alicia most likely saved John’s life, and the safe haven she provided is a primary reason he was able to recover. They are both exceptional human beings, and we can learn so much from their examples of perseverance: Alicia as a stable supporter, and John as evidence of the ability to harness and control an unstable mind without medication. Together, they made major contributions to the worlds of mathematics, economics, and science, and I believe their story will continue to influence the sociology of mental disorders for years to come.

A Brilliant Madness: The Story of John Nash (2002) https://www.youtube.com/watch?v=6umPEeu5-8I