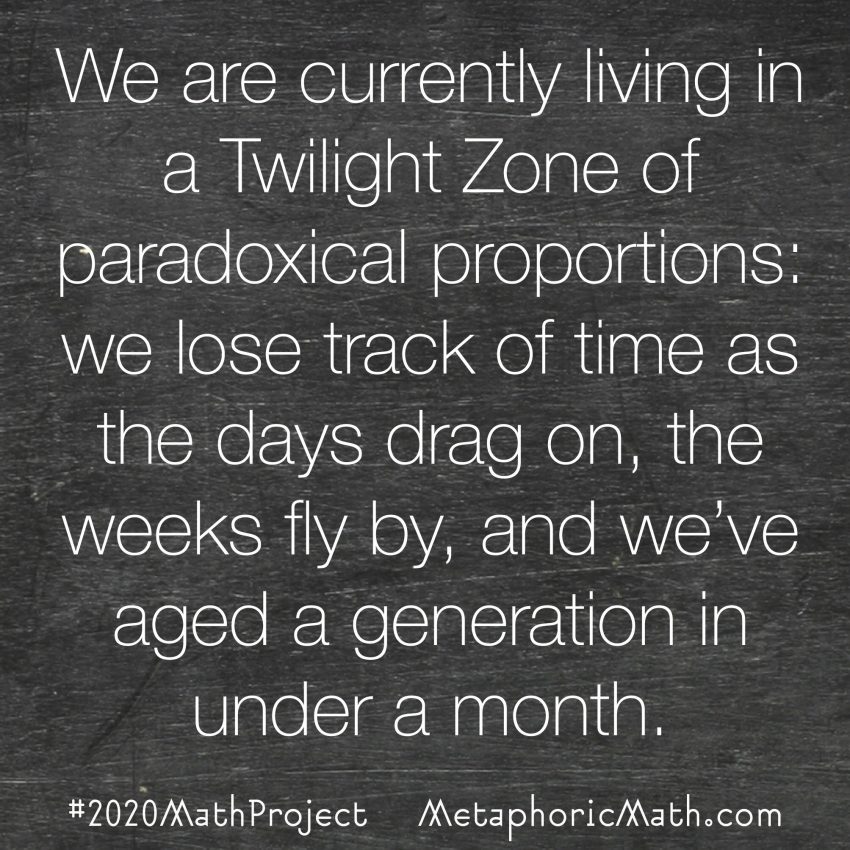 Our perception of time is challenged by two opposing forces, and thus we are experiencing a phenomenon where our world has changed rapidly, yet many of us are sequestered to our homes in a perpetual pattern of isolation routines with no definitive end in sight. We’ve been forced to adjust to a tsunami of massive change in the blink of an eye, yet many elements of our lives are floating in a holding tank. Sink or swim – or tread water.

Regardless of your circumstances in the midst of this current crisis, it’s safe to say that most, if not all of us have reached a collective state of weary. The emotional toll of uncertainty has cycled through a pattern of grief: shock, denial, anger, adrenaline, acceptance, adjustment, and an attempt to regroup and soldier on through this war zone until we are no longer trapped within its borders.

One day bleeds into the next, as each rise and fall of the sun serves as a slow and steady reminder to continue to breathe. Time will not stand still. The minutemen march on as the seasons change.

Our perceptions of time are warped while we’re hurtled through a dark and terrifying tunnel, straining to see a sliver of light on the other side. How do you calculate warp speed anyway? Einstein twisted our minds when he theorized time as an illusion relative to speed, not to mention gravity can also bend time.

While Einstein gave us a deeper modern understanding of physics in the twentieth century, Newton got the ball rolling in 1666 when he formulated the basis for calculus and the laws of motion – which just so happened to be drafted during a period of social distancing while Newton’s university studies were disrupted by the bubonic plague.

In simple terms, calculus is the branch of mathematics that deals with change. Functions, graphs, derivatives, logarithms, exponents, and integrals are commonly associated with calculus. One of the most basic formulas of physics is also used in calculus as a starting point for determining the rate of change:

I recently heard Tadashi Tokieda present an analysis of how calculus can be used to interpret our emotional perceptions around the changing of seasons. In a typical location that experiences all 4 seasons, it is common for people to feel like the hot days of summer stretch on and on in the abundance of sunlight, while the cold nights of winter darkness drag by and even stand still in similar fashion. Conversely, the fleeting days of spring and fall feel like much shorter seasons.

This can be explained by observing the rate of change: in the spring and fall, there is a much larger span of temperature changes and the amount of change in daylight hours appears more dramatic as well, whereas the derivative of change at the peak of summer and winter approaches zero. When you plot daylight hours in relation to time, the resulting curve over the years mimics a sine wave, with the sharpest inclines and declines corresponding to the spring and fall equinoxes.

It’s no wonder we all feel discombobulated as we struggle to remember what day of the week it is; we’re experiencing change at an exponential rate. After we begrudgingly complied with the customary start of daylight savings time on March 8th, we crossed the vernal equinox on March 19th, a calendar date which happened to bring the earliest spring to the US in 124 years. However, many of us were too busy paying attention to rapidly changing news feeds in the midst of a different and novel crisis of coronavirus to observe the shifting seasons. Now many North Americans are slowing down and shifting focus to sowing seeds in whatever soft soil they can find. Summer harvest will be here soon.

The journey to this harvest is a marathon, not a sprint. Adjust expectations accordingly. Some of us have been training longer than others, but no one’s playbook prepared us for this. There was no map included for navigating the course through a torrential storm that’s knocked out bridges and power lines and forced detours left and right. All bets are off as we race in survival mode. The goal has shifted from beating a target time to finishing the race alive. Tend the garden, stay hydrated, and remember to rest. This endurance trial is the ultimate opportunity to cultivate anti-fragility; what doesn’t kill us can make us stronger and nourish us for life.