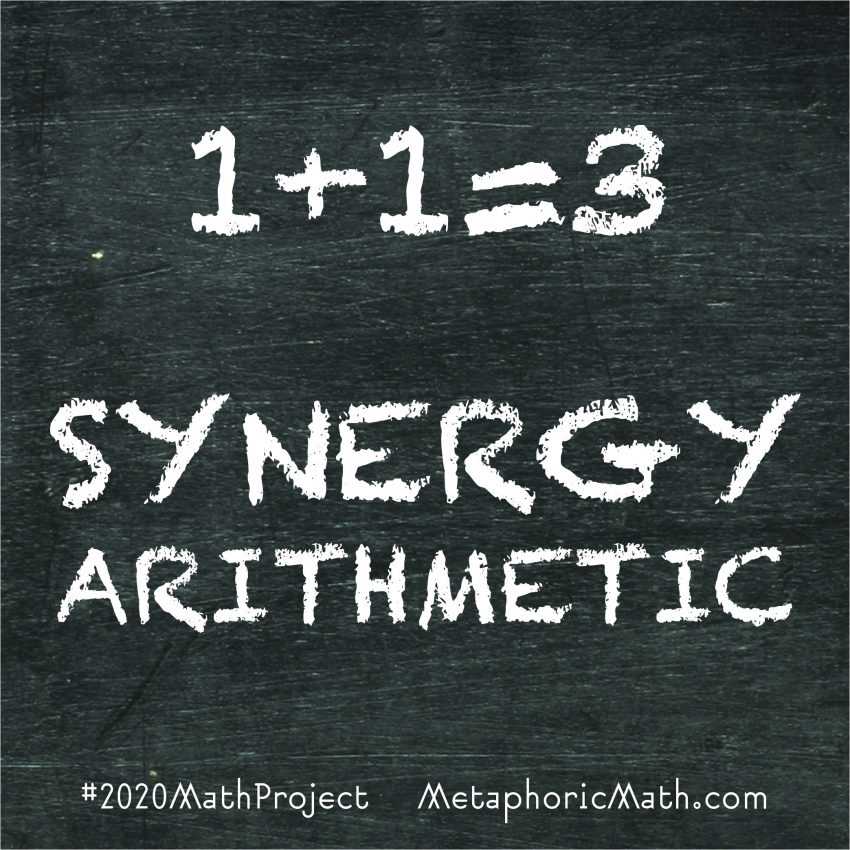 Arithmetic (from the Greek arithmos, “number” and tiké [téchne], “art”) – is commonly defined as the study of numbers and their manipulation by the processes of addition, subtraction, multiplication, and division.

Synergy (derived from the Greek word synergos “working together”) — is the concept that the whole is greater than the sum of the parts.

Synergy Arithmetic is a paradoxical principle.

Some basic equations that defy arithmetic conventions include 1 + 1 = 1, or alternatively, 1 + 1 = 3 depending on context. On the surface, these equations are inaccurate calculations, but there are certain exceptions to conventional counting where these statements hold true.

One raindrop added to another raindrop combines to equal a single raindrop. Conversely, a man and woman combine to produce a family unit of three or more. A merger of two companies has the potential to leverage their combined assets to achieve far greater outcomes than either would be able to produce alone, and teams of people united by a common goal can manifest and implement solutions that produce massive results, in which case it may even be possible to imagine how 1 + 1 = ∞.

Mathematics is intertwined with science, and both fields are constantly seeking to understand, prove, and explain the fundamental laws of the universe that govern our existence. Many commonly held truths that we accept with ease currently were considered absurd not long ago. Our familiarity with ideas influences our cognitive understanding, and frequency of exposure tends to validate what we believe to be true.

Consider the concept of negative numbers. Until the 18th century, European mathematicians refused to accept negative numbers and referred to the idea as “absurd” and “meaningless,” even though scholars in India and China had already been using negative numbers for centuries. Such sentiments persisted into the 19th century when similar resistance was exhibited toward the ideas of imaginary and irrational numbers as well as the concept of infinity – all of which are commonly accepted and frequently used in the fields of physics, chemistry, biology, and finance today.

In the second half of the 20th century, the concepts of 1 + 1 = 3 and 1 + 1 = 1 became increasingly prevalent to describe certain behaviors in the areas of economics, business, and social science, though until very recently, synergistic expressions were discounted as not being grounded in true mathematics.

While conventional arithmetic has been widely used and accepted for millennia, thought leaders in modern times increasingly posit questions concerning a wider range of inherent paradoxes in the traditional school of arithmetic thought. Researchers and mathematicians Mark Burgin and Gunter Meissner have formally presented several formulas that reinforce the validity of Synergy Arithmetic in select situations. For any math and research nerds out there, I suggest reading their paper about Synergy Arithmetic in Economics in the 2017 Applied Mathematics Journal.

The conclusion of their study states: “Although for a long time these [Synergy Arithmetic] expressions were considered mathematically meaningless, we show that they are mathematically correct in some Non-Diophantine arithmetics or in prearithmetics. Therefore these expressions are approved and authorized by mathematical laws and are able to reflect phenomena in economics and physics.”

That’s as far as I’m going to take this idea in terms of traditional mathematical proofs, but I’m just getting started with building a case for the benefits of applying Synergy Arithmetic in my own life. I intend to study various social examples in more depth as well over the course of the 2020 Math Project.

While I didn’t have a name or clear explanation for this paradox at the beginning of December 2019, the idea for Metaphoric Math was born out of the observation of the possibility that Subtraction Multiplies Abundance. As I began to dive deeper into how math could be used to describe the dramatic results I was experiencing in my own life, I became increasingly fascinated by paradoxes. It seems this equation could fall under the definition of synergy, as -1 + 1 = 1 or more, not zero.

Throughout 2020, I will be researching and presenting my findings as I seek to prove how the operation of subtraction can be used to produce positive and even dramatic results in individual lives, communities, and businesses – regardless of whether we’re looking at a solo entrepreneur or employee in a large corporation. Synergy appears to be a key driver.

Stephen Covey highlights Synergy as the 6th habit and crowning achievement of the preceding 5 foundational habits of highly effective people. He also closely relates synergy to ecology, which describes how all of nature is interrelated and synergistic.

The potential for synergy lies in the ability to value the differences.

This mindset is immensely valuable in relationships where the potential for collaboration is inherent. When you are able to recognize that 2 people can have opposing views or methods, yet both can be valid approaches to achieving the same ultimate goal, you gain a higher level of perspective. This can allow for the orchestration of multiple people and parts, each contributing their unique strengths and talents to the creation of an artful symphony whose volume reverberates louder and farther than any individual instrument ever could on its own.

Synergy thrives in an environment of freedom. Too many rules and expectations squash the potential for creativity to flow, and creativity is a key ingredient in synergistic collaborations with others. The power of teamwork lies in each member contributing their unique set of strengths and perspectives while filling in knowledge and skills gaps that would hinder a single member from achieving the goal. By being open to different viewpoints and recognizing and valuing differences, you can create an atmosphere that cultivates collaboration and creative alternatives.

Win/Win goals are the energizers of synergy.

Don’t confuse compromise with synergy, which is the ultimate goal of Win/Win.

Win/Win can also be applied to personal choices and is a key to building momentum in habit arithmetic. In fact, Think Win/Win is another of Covey’s 7 interrelated habits. It is a paradigm shifter with infinite potential. What positive habits can you stack together to counteract weak tendencies and support follow through of desired behavior changes, thus increasing the likelihood of a greater overall result?

If you can reframe your focus on the positive benefits vs. the difficulty of implementing a new habit and apply scientifically based techniques like habit stacking from an expert on habits such as James Clear, your motivation and follow through can dramatically benefit and produce positive change that compounds over time.

Seek out synergy. The results will surprise you.